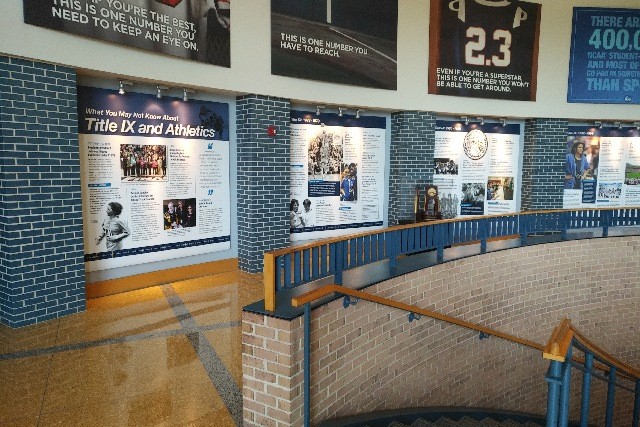 ​“What You May Not Know About Title IX and Athletics,” a six-panel exhibit, is now open for viewing in the NCAA Hall of Champions.

The exhibit is a celebration of Title IX’s 45-year history. It features a collage of moments and historical pieces of legislation across a 50-year period, commencing Oct. 13, 1967 — five years before Title IX was signed into law — and culminating with Title IX’s 45-year anniversary on June 23, 2017.

Kelly Dodds, assistant director of the Hall of Champions and Conference Center, reached out to Amy Wilson, director of inclusion, on the idea as Wilson was preparing the release of the “Title IX at 45” report. Wilson wanted to teach others about Title IX’s history and to celebrate the law’s impact, and pitched the idea of an exhibit to Craig Malveaux, postgraduate intern of inclusion. Malveaux worked with Dodds to discuss the most effective ways to showcase Title IX.

“We are so excited to have the opportunity to educate our visitors about Title IX as it celebrates its 45th anniversary,” Dodds said. “Although it has been around for almost a half century, many may not know how it came into existence and how it benefits all individuals, especially women and the underserved. The Hall of Champions is the perfect place to help tell that story.” The six-panel exhibit is sectioned off by decades and can be seen on the wall facing the stairs on the second floor.

By working with Wilson, Malveaux was able to select the most important moments over the 45-year history to highlight in the exhibit, including the founding of the Association for Intercollegiate Athletics for Women, the NCAA’s lawsuit against Title IX, the NCAA’s Gender Equity Task Force, the U.S. women’s national soccer team win in the 1999 World Cup, female student-athlete accomplishments in a variety of sports and much more.

“One of the pillars of the office of inclusion, from my perspective, is education,” Malveaux said. “We, as an office, seek ways to educate membership institutions — with respect to women, race/ethnicity, LGBTQ, international student athletes and student-athletes with disabilities — through best practices, informative guides, reports and resources. So, it means a great deal to me to have the opportunity to educate myself — first and foremost — and help educate others on such a critical topic as Title IX as an intern.” Stop by the second floor of Hall of Champions to celebrate Title IX.