It All Begins With A Dream: A New Mural By Artist Jingo de la Rosa 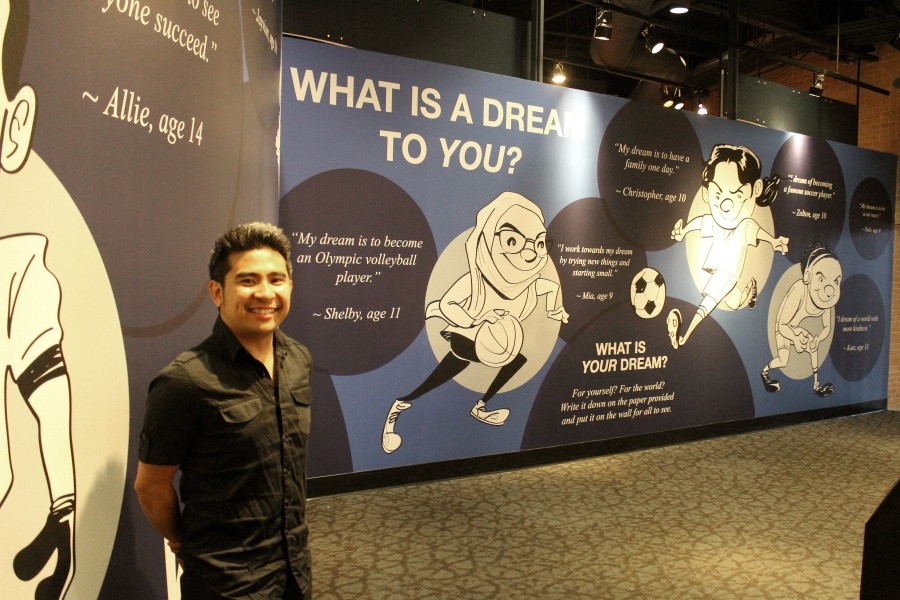 Bring the family to the NCAA Hall of Champions to see our newest exhibits, including the new mural ‘It All Begins With A Dream’.  The mural is currently displayed in the NCAA Hall of Champions outside the Kick-off Theater. The artist of the mural is Jingo de la Rosa, a commercial illustrator, art educator and community artist, who was born and raised in the Philippines and now resides in Indianapolis.

“When I was a child in the Philippines, I can remember watching the Final Four on television,” Rosa said. “I never could have imagined that I would be a part of something like the NCAA Hall of Champions.”

‘It All Begins With A Dream’ is not just a picture on a wall – it’s a statement. It showcases the conversation that Rosa had with several children and young adults about what a dream means to them. Their dreams and ambitions started at an early age, much like the 460,000 student-athletes represented by the NCAA.

The mural is also a backdrop for a new children’s area, where small tables, post-its and pens are set-up. Children are encouraged to write their dreams and place it on the mural.

Many of the sports kiosks on the first floor also have new artifacts.

So if you have not been to the Hall of Champions in a while, plan to come soon.  You can make a day of it as we are located in the beautiful White River State Park in downtown Indianapolis – just down the road from the Indianapolis Zoo.